An iPhone-controlled drone unveiled at the recently held CES is expected to revolutionize the world of video gaming. Called the AR.Drone (AR stands for augmented reality), this new product will literally bring video games to the streets. 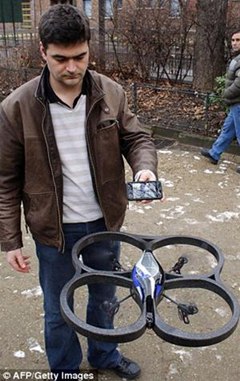 "The flying saucer-like AR.Drone's creators gave a demonstration near their company's offices on the Canal Saint-Martin in Paris...

One of the ten engineers who has spent four years developing the drone tapped a button on his iPhone to lift it off the ground and make it hover near the dark waters of the canal.

Then he tilted the phone forward or sideways to make it manoeuvre around nearby trees and park benches. The machine's four propellers whirred quietly as it moved through the air, its camera streaming live video from two cameras, via Wi-fi, to the pilot's phone.

The drone moves at 11 miles per hour, can stay airborne for 15 minutes after a 60-minute battery charge, has a maximum range of 50 metres, and weighs just over 300 grams. It is said to cost just £300.

Its automatic flight stabilisation makes it far superior to any other flying toys currently on the market, the company boasts.

'We used very sophisticated technology to develop it - technology that is used in military and commercial drones,' said Henry Seydoux, the founder of Parrot, the company that makes the toy." 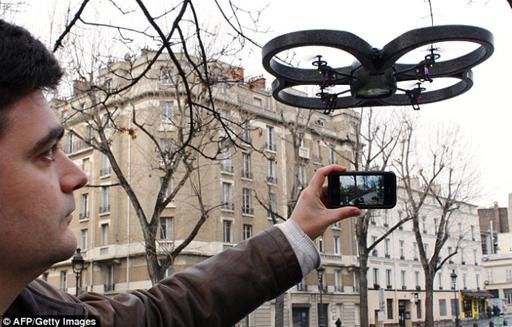 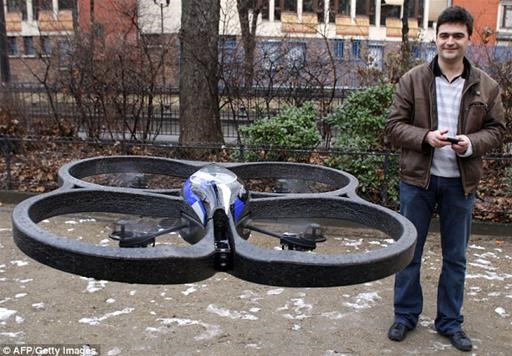